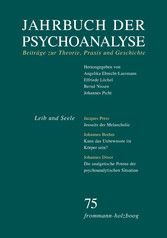 
The >Jahrbuch der Psychoanalyse< (Yearbook of Psychoanalysis) was founded in 1960 as a scholarly medium for publication and discussion of the German Psychoanalytic Association. Its initial goal was to end the exile of psychoanalytic research and treatment, which had suffered heavy losses due to the rupture of civilization under National Socialism, as much as possible, to bring it back into use and to improve its potential for development. »Working in our own country while maintaining a constant exchange of ideas with the work of the psychoanalytic writers in the entire world«: This was the task which Anna Freud entrusted to the >Jahrbuch der Psychoanalyse< in 1960. It is still valid today as the basic principle of the dialogue in the diversity of psychoanalytic schools of thought. Without any commitment to a specific school of thought, the >Jahrbuch< is based on the idea of the optionality of every interpretation which is protected from arbitrariness based on loyalty to a certain method. This idea applies to all the categories in the >Jahrbuch<: clinical practice, clinical theory, metapyschology as well as applied psychoanalysis. In addition, it supports the long tradition of translations of the pre-released talks held at the international psychoanalytic conferences and the publication of the annual Karl Abrahan and the Wolfgang Loch lecture. The >Jahrbuch< focuses on the psychoanalytic-methodological essentials as prerequisites for the development of the wealth of experience and applications of psychoanalysis and tries to promote connections to the international discussion as well as the dialogue with neighboring disciplines from the fields of science, art and society. Peer-reviewing, which was introduced in 2002, has helped with the selection and the improvement of the articles submitted. The regular publication of volumes on specific subjects has challenged the editorial staff and the publisher to provide a comprehensive introduction of a topic from various perspectives and ensure that this becomes a part of the scholarly discourse on this specific subject. The profile of the